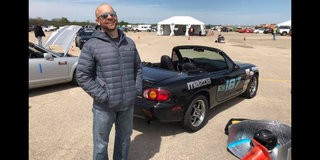 The 2019 Tire Rack SCCA® Championship Tour made its third stop in three weeks this weekend in Mineral Wells, TX for the 2019 Tire Rack Mineral Wells Championship Tour. While the Tour is on a roll, this was the first National Solo event of the season for most participants. Despite new faces, competition had the same competitive feel we saw in Georgia and North Carolina.

D Street has many new cars this year and those changes have brought variety to the class. Reigning Solo National Champion Javier Reynoso won the class in his Civic Type R, but Andrew Converse narrowly took the fastest time on Sunday in his Scion FR-S , landing in second place. Brady Loretz had set the fast time on Saturday, but challenges on Sunday dropped him to the third and final trophy position in his Hyundai Veloster. The top five in class were separated by just 1.7 seconds and represented four different auto manufacturers.

In the offseason, Kerry Coughlin made the move from Street Touring Roadster to E Street in a new-to-him NB Mazda Miata. While Pax Rolfe, in his first National Tour event, led after Saturday’s runs, it was the experienced Coughlin taking the class win. In third was Brian Tefft, Jr. who also migrated to E Street in the offseason, but from X Prepared. Zach Barnes claimed the fourth and final trophy.

Autocross is all about being fast and not hitting cones. That was a challenge this weekend for Dan McCelvey who failed to record a clean run and averaged two cones per run. That was still good enough to finish second in Street Touring Roadster, 3.632 seconds behind David Whitener, less than the cone penalties McCelvey carried in his fastest runs. Andy Neilson and Chris Leclair claimed the third and fourth place trophies respectively.

In the past few years, we’ve seen Ron Williams in a number of different cars from an STS Honda to a SMF Mini. This weekend he hopped in a different Mini, co-driving in H Street with Greg Reno. Williams took the H Street win by 3.763 seconds over Cameron Goode in his Honda Accord. Zach Taulbee took the third and final trophy in his Ford Fiesta ST. Winning car-owner, Reno, was only 0.012 second out of the trophies in fourth.