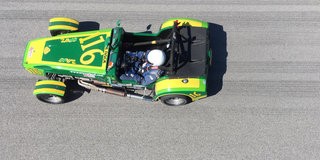 BOWLING GREEN, Ky. (October 1, 2018) – In its first year, the Tire Rack SCCA Time Trials Nationals drew 123 entries from across the country, the furthest traveling from Portland, Oregon. Drivers competed in eight individual events, with the best HotLap and TrackSprint times from each day contributing to the drivers’ placements.

In addition to the traditional class placements, eight superlative awards were given during the Koni Podium Celebration to highlight some exemplary individuals. The first was the Top Time of the event. Two cars battled for this honor all weekend: Chris Ingle in his Dodge Viper GTS-R and Andy Hollis in his McLaren MP4-12C. Each claimed the win in their respective classes handily. The competition stayed close through the last event, but by less than two seconds Ingle took the honors. Not to be left out, Hollis took home some additional hardware, claiming the Top Time in a street-legal car.

In the spirit of low barriers to entry for the SCCA Time Trials program, the driver with the Top Time in a "car driven to the event" was presented to the sixth-fastest driver overall, Patrick Daugherty. The Top Novice was also recognized. This award was given to the novice driver who came closest to winning his or her class. This honor was won by Chris Finnigan, finishing second in Tuner 5.

Throughout the weekend, a small band of volunteers made the event possible. Sunday, these volunteers voted for their favorite car from the event. The winner, in one of the most identifiable cars of the event, was Mike Breakey in his 1971 Lotus Seven. One of those volunteers jumped on board just after the event was announced earlier in the year. His enthusiasm for the event and willingness to help out made him an easy choice for the Spirit of Time Trials Award. From Unlimited 2, Andrew Maffessanti took home this honor.

The people at the Grassroots Motorsports and Classic Motorsports magazines presented two awards to drivers who embodied the spirit of their publications. In his 1981 Pontiac Trans Am, John Krupa claimed the Top Classic award. The True Grassroots Award went to two drivers in a 1996 Ford Probe GT with a livery for “Wu Tang Financial,” Stephen Lee and Cody Willett.

A full list of class winners with car make & model, and margin of victory is below: