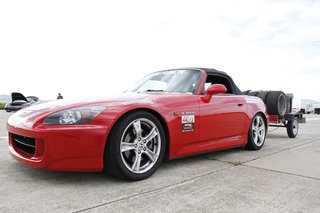 The Crows Landing Championship Tour showcased great driving and camaraderie this past weekend, with racers traveling from near and far to compete. One such individual, Wayne Dyck, came all the way from Calgary to contend in C-Street (he finished just two spots out of the trophies).

Some participants tow their racecar on a trailer, while others use a tow on their racecar—sometimes traveling for days—to feed their addiction for autocross. Here are a few of the cars from this weekend that raced in their tow cars.

Here is Kate Fisher in her STR prepped S2000 along with her trailer, which she drove over two days to a first place finish by a mere four-hundredths of a second. She has also made the drive from Arizona to Lincoln, Nebraska!

Towing in from Las Vegas was Marlon Tecson in his 2013 Scion FRS. This STX prepped car has a bit more room inside, but with a weekend full of gear, a tire trailer goes a long way.

I was out there in my Street Prepared Miata, only having towed six hours to get to Crows (no air conditioning, but yea I left in the stereo for some jams). Luckily my fiancé Lauren Kane was there to share in the driving! We brought everything two people needed for a weekend, a set of race rubber, 10 more gallons of E85, along with the usual autocross stuff.

It is possible, albeit with an extra cushion, even to drive a stiffly sprung car to events across the country. Traveling to different regions, I have met some fantastic new people, seen new cars, and experienced new course styles that I would have otherwise missed out on. I hope this inspires people to get a trailer and get out to some of the fantastic National events that are within a day's travel or even farther!