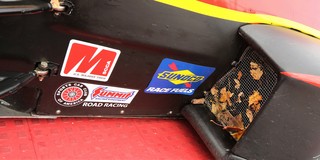 The opening day of qualifying during the Runoffs® was special—it was “Sunoco 260 Tuesday.” The driver in each of 26 car classes whose best qualifying time came closest to including .260 received 10 free gallons of Sunoco race fuel for their car.

Why was this challenge called 260 Tuesday? Well, Sunoco’s 260 race fuel has been highly regarded for many years. Still available today, Sunoco’s 260 GT is a street-legal (in most states), oxygenated, unleaded gasoline designed for high performance street cars, muscle cars, classics, street rods, motorcycles, and the like. With a 100 octane rating, Sunoco 260 GT allows increased boost levels in supercharged or turbocharged applications as compared to lower octane “pump” gas. It is engineered to not harm catalytic converters or oxygen sensors, and contains a comprehensive additive package for greater engine protection and reduced fuel system deposits. It is compatible with two-stroke synthetic and mineral-based engine oils, and safe for carbureted and fuel injected engines.

Sunoco has been powering victories on and off the track for nearly 135 years, and has been the Official Fuel of SCCA for nearly two decades. Below are the drivers who claimed a Sunoco 260 Tuesday reward, including class, driver’s name, hometown, SCCA Region, car make/model, and the qualifying time from Tuesday that earned them the prize.

Congratulations to all the winners, and many thanks to Sunoco for supporting SCCA Runoffs competitors.