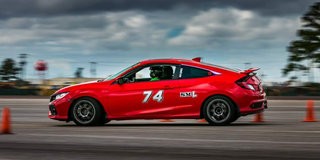 Tara Arnette, the latest Take 5 interviewee and one of this year’s three Wendi Allen Scholarship recipients, grew up in Pennsylvania, but has lived in North Carolina since she was 15 years old.  She is a certified beekeeper, a welder of cool yard art, and a dyed in the wool Volkswagen fan.  She is an Environmental Auditor, used to compete in Roller Derby, and has loved cars and racing for as long as she can remember.

JH: First off, as I do with all the Wendi Allen Scholarship recipients, I want to start off by saying congrats!  What was your initial thought, or feeling, when you got the news, and how has it impacted you?

TA: I was definitely shocked to find out I was one of the recipients. It is such an honor to be a recipient. I am sure a lot of incredible women were nominated. I take this very seriously, and hope to make everyone proud through fast driving and being a good role model for any women just starting out. And it has really opened up a lot of opportunities to do events I had no idea about before!  The coolest part was being congratulated by people I hadn’t ever met before at the Charlotte Champ Tour, which was right after the announcement was made.

JH: Have you always been into cars, or was that something that happened later in life?

TA: I have always loved cars! I have been a VW fangirl my whole life. In fact, I did my first autocross in my 1974 VW Beetle 10 years ago. I wasn’t the fastest one out there, as you could imagine, but I had a blast!  I ran a bunch of different VWs since then, from GTIs to the Golf R. However, about a year and a half ago, I made the switch to the Honda Civic. I am still a VW fan at heart, but the Civic has been the best car I have competed in. It’s the first car I have really clicked with.

JH: Your first autocross was in a Beetle?! That is awesome. How did that come about?

TA: I saw an event, and not being one to sit back and just watch, decided I had to get out there and give it a shot! Like I mentioned before, I didn’t set FTD for sure, but that event set the hook that kept me coming back!

JH: With the Wendi Allen Scholarship being for new or up-and-coming women in autocross, talk to me about being a woman in our sport.

TA: Luckily, it has been really positive for me. I was worried at first that people would judge me.  But I haven’t seen or felt that.  And then, when I started instructing at local novice schools, I wondered how the guys would take it. But it’s generally always been great. Nothing but respect from the guys!

JH: What would you say to any woman that is kind of on the fence about coming out and trying autocross?

TA: I tell them it’s like any other sport or activity you want to get into. You just have to get out there and just go for it. I love that more and more women are becoming involved in autocross, and I will gladly help the sport grow in any way I can!