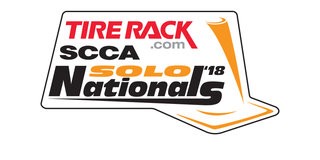 TOPEKA, Kan (July 10, 2018) -- In only four days and four hours, the 2018 Tire Rack SCCA® Solo® Nationals reached its entry cap of 1,350 participants, an unprecedented feat for the Sports Car Club of America®.  Those who registered after the cap was reached have now been added to a waitlist.  If entry cancellations come in, persons will be offered a slot at the Sept. 3-7 event in Lincoln, Nebraska according to their position on the waitlist.

Howard Duncan, SCCA’s Rally/Solo Senior Director, said, “I have been working with SCCA’s Solo Department a long time and never imagined that the Solo National Championship could possibly sell out so quick! This is truly a testament to the ever-increasing interest in Solo’s top-tier event AND the welcoming environment existing in Lincoln each year.”

Last year, in 2017, the Tire Rack Solo Nationals set a participation record with 1,317 entries. That record may very well fall this year.  Whether it does or not, there is no denying the meteoric growth Solo Nationals has experienced over the last several years. A lot of that can be attributed to changes in the Solo landscape dating back more than a decade.

In the 1990s, Solo Nationals already had a strong following and a home in Salina, Kansas.  As popularity grew, a new site was found at Forbes Field in Topeka, Kansas to handle the influx of competitors. In 2000, the event first reached nearly 1,000 entries. In 2009, the Championship was relocated to its current home at Lincoln Airpark in Nebraska, and entry numbers continued to grow.

Beyond the location, strategic classing decisions have also played a significant role in the event’s popularity.  In 2011, there were 283 cars participating in Stock classes. In 2012, the Solo Events Board began taking steps to migrate Stock to the new Street ruleset.  Now in 2018, there are 440 drivers registered to participate in Street classes. That shift from Stock to Street accounts for half the event’s growth over the last seven years.

Of course, the addition of new classes has also aided in growth. New for 2018, the Solo Spec Coupe (SSC) class boasts more than 65 entries at Solo Nationals.  And the inclusion of Classic American Muscle (CAM) competitors is responsible for more than 90 entries this year.  These classes, along with the shift from Stock to Street, represent 82 percent growth in participation from 2011 to today.

What’s in store for the future of Solo Nationals?  Only time will tell.  But rest assured this top-tier, SCCA event will continue to be one of the world’s largest motorsport competitions for many years to come.

The Sports Car Club of America®, Inc., founded in 1944, is a 67,500-member motorsports organization that incorporates all facets of autocross, rally and road racing at both Club and professional levels. With headquarters in Topeka, Kansas, the SCCA annually sanctions over 2,000 events through its 116 Regions and subsidiary divisions. Much of the SCCA's activities are made possible with support from the following Official Partners: Chevrolet, the Official Truck of the SCCA; Hawk Performance, the Official Brake Products of SCCA; Mobil 1, the Official Oil of SCCA; Sunoco, the Official Fuel of SCCA; and Tire Rack, the Official Tire Retailer of SCCA. To learn more, please visit www.scca.com.