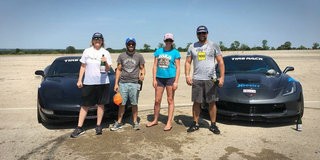 In a weekend of extreme heat, participants used whatever means possible to keep cool in Texas for the Tire Rack Mineral Wells ProSolo® and CAM Challenge. The competitors from Arizona and Southern California win the prize for ingenuity, using a misting system under their E-Z Up tents to keep cool as temperatures reached 102 degrees, with heat indexes more than 10 degrees higher. Everybody embraced the slightly cooler temperatures on Sunday.

The Tire Rack CAM Challenge drew a strong 38-driver field. Saturday night brought drama to the competition as a protest was filed over the street-legality of the two Shelby Cobras entered. It was settled with some penalties and the day 1 leader Joey Green installing the windshield on his 1965 Cobra. Green was able to put the ordeal behind him, clocking his best right and left side runs in his final views of the courses and taking the CAM class victory by 0.918 second over David Rock in a Chevrolet Corvette Z06. David Lousteau, Sr. was just 0.130 second behind in his own Factory Five Cobra. Kyle Tucker, Brian Matteucci, Nick Gruendler, W B Sephus, Michael Cobb, Jason Kupka, Tyler Garling and Corey Pettett claimed the remaining trophies in the very deep class.

Street Touring Xtreme looked like a spec class for the twin Scion FR-S and Subaru BRZ with seven drivers. Manfred Reysser stood on an early lead all weekend, impressive considering he took pride in taking no course walks. He claimed the victory by 0.810 second over David Webb. Miles Furlong claimed the final trophy, just 0.011 second back from Webb. Reysser went on to claim the Super Challenge win.

The Porsche 911 Turbo of Su Brude and Stan Whitney has been parked since the 2017 Tire Rack Solo Nationals as the couple had their focus elsewhere. That didn’t seem to slow Brude down as she quickly remembered what to do and wheeled the 911 to the Ladies Class 1 win. Nicole Wong found time on her final runs to finish just 0.087 second back in second. Cindy Duncan and Dana Gill claimed the remaining trophies. Wong went on to climb the Ladies Challenge ladder for Top Eliminator honors there.

The C Street Prepared Miata affectionately known as Oscar found a new home this season with Matthew Hodges. After a challenging weekend in Lincoln, Hodges rebounded to take the Street 2 win by a mere 0.043 second over Neal Tovsel. Stan Whitney claimed the final trophy in third.

Rarely is a class win determined by thousandths, but that’s exactly what happened in Street 4. The top drivers of the class found their time on Sunday morning. The win went to Zachary Sober who went fastest on his last two looks at the courses, just 0.007 second over Brad McCann, who improved on his last left-side run. Paul Kurtz, Kevin Brewer and Brandon Dan claimed the remaining trophies in third through fifth respectively.

Complete results from the 2018 Tire Rack Mineral Wells ProSolo and CAM Challenge can be found here.