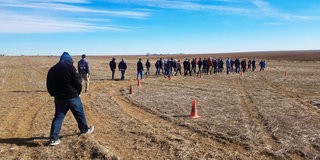 The Colorado Region started its 2018 SCCA® RallyCross® season by introducing many new members to the thrills of racing sideways on dirt. The weekend began with a Saturday novice school that broke previous attendance records with 41 students. Sunday’s racing action had a whopping 86 competitors happily flinging dirt under clear blue skies. Not only was the weekend’s attendance a wild success, so was the region’s new RallyCross venue at the Front Range Airport, which sits just east of the Rocky Mountains.

For most of the students, this was their first time driving in an organized competition environment. To make sure their initial experience was positive, the region utilized over a dozen instructors, ensuring everybody received the coaching and direction they needed. With several national-level drivers imparting their racing knowledge and wisdom, there was no shortage of people teaching the art of going fast on dirt. Female students and instructors were also paired together in an effort to reduce the gender barrier often perceived in racing.

This immersive approach proved to be effective. Throughout Saturday, event chairman Max Lawson approached as many newbies as possible and polled them about their RallyCross plans after the novice school. Without exception, the students were excited about pursuing more seat time this season, including 26 that signed up to race the following day.

The novice school started with a driver’s meeting, track walk and parade lap, all of which are the norm for a day of RallyCross. These give drivers the opportunity to examine and learn the race course, terrain and conditions without the added complexities of competing.

The next step in the instruction process was to teach handling skills through drills. This was done by having competitors repeatedly drive through different course features rather than the whole track, allowing instructors and students to focus on specific driving techniques. The new racers were then turned loose on the whole course to put their new skills to the test.

Jenny Bajwa Melius summed up her experience by saying, “I did the school on Saturday and the race on Sunday at the urging of my husband. He’s been pushing me for years to join him. I’m not a car person and I was really nervous about going, but everyone out there was incredibly welcoming. They genuinely wanted me to have a good time and learn new skills. This group really advocates having fun first and foremost. I learned a lot of new techniques at the novice school. It was a lot of information all at once, so it will take a few more events to let everything sink in. I do plan on coming back for more races. The racing was fun, but the encouragement and enthusiasm of all the other racers is what made this a great event.”

There were so many competitors on Sunday that the group utilized the national SCCA format of three run groups. This meant one group of drivers was always free to give rides to spectators interested in joining the fun. As you can imagine, there was no shortage of people wanting to experience the speed of RallyCross from the passenger seat.

The weekend concluded with lots of smiles, new competitors and the potential for many more. After just one event, it looks like the Colorado region is going to have a busy and fun summer of RallyCross.

A list of upcoming, local RallyCross events can be found at here. Find an event in your area and come join the fun!