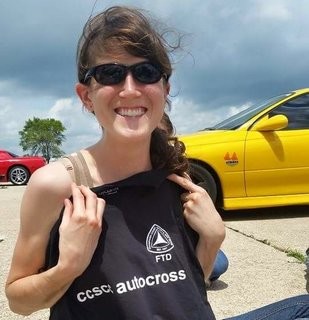 Johanna Foege grew up in the suburbs of Chicago and went to school at Northern Illinois University where she earned her degree in the Biological Sciences. From there she moved to Chicago, where she worked with several different organizations including Shedd Aquarium, the Museum of Science and Industry, and the University of Chicago. She moved down to St. Louis to assist with research at Washington University School of Medicine in 2013, then ended up in her current position three years later overseeing the Quality Control Program at Perennial Artisan Ales.

Foege started autocrossing in 2011 after copious prodding from her brothers and friends, and has been hooked ever since -- running multiple cars the first few years, but eventually settling in on the Mazdaspeed6 she currently co-drives.

JH: First off, congratulations on being chosen as one of the recipients of the Wendi Allen Scholarship Fund award. I imagine that was extremely exciting news to get. Where were you when you first heard, and what was your initial reaction?

JF: I was actually at a St. Patrick’s Day party when I got the call from Howard Duncan. I was totally excited when he let me know I had been one of the women selected. What was funny was that I was with a bunch of people that really didn’t know I raced. So when they were asking what the call was about, I got to tell them I won a scholarship for racing! I called my teammates shortly after. They were super excited about it and were like, “We gotta get our schedules cleared for all the events!!”

JH: How did you first start autocrossing? Was motorsport something you were always in to, or was it something that became a passion after you first tried it?

JF: My family fostered my interest in cars throughout my life. While my father had never participated in organized motorsports himself (despite having a Lotus Esprit V8), he did everything in his power to assure my brothers and I were all exceptional drivers. My mother passed away when I was nine, so she wasn't there to stop him from making us do things like back a trailer across empty parking lots, slide around in the snow, or make us service our own vehicles. My brothers also brought home a variety of fun cars that they made me drive from time to time. I really came to enjoy all of that. And it was my brothers and another friend that eventually got me to try autocross. At that first event, I ended up taking first in my novice (open) class of seven -- on my first run, nonetheless! Obviously, I was immediately hooked. From 2012-2013, I participated in as many local events as I could afford and drove as many different cars as I could find co-drives for. Eventually, I settled on the MazdaSpeed6 we drive now (though I do still race my Speed3 and Mini Cooper S from time-to-time as well).

JH: Of all the choices of out there, a Mazdaspeed6 is not usually high on most people’s list. If you could start from scratch, would you choose something else or still take the unbeaten path of the Speed6?

JF: I would definitely stick with the Mazdaspeed6. It’s so awesome because it is so unique. Part of the enjoyment comes from the fact that it presents some great challenges in that there really isn’t an aftermarket for it, and that no one has really tried to develop one. I've really enjoyed watching, helping, learning, and experiencing the development of that car over the past five years.

JH: With the Wendi Allen Scholarship Fund being for young or new women in our sport, and the new Women on Track initiative really taking on traction, talk to me about being a woman in our sport.

JF: At times it can be really frustrating, and then it can also be very rewarding. While it is frustrating to have someone just presume you are inexperienced or unknowledgeable because you are a woman, it is at the same time very rewarding to prove to them that you aren’t just a woman, and that you can drive and are knowledgeable. After attending the Women's Initiative luncheon at Nationals last September, I attended a local committee meeting to bring some ideas to the table. Our St. Louis Solo Chairman, Cortni Townsend, is a fellow woman driver, so she's been very supportive of my ideas. I've started a Facebook page for women who have an interest in motorsports and have hosted one happy hour so far. I'm aiming to plan more social events like that, as well as some karting events for us soon. I hope that I am part of a movement that one day changes the perception of people from seeing a woman driver, to simply seeing a driver. 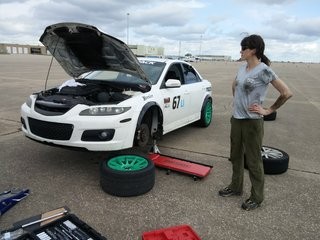 JH: The Wendi Allen Scholarship was created in memory of Wendi, who loved the SCCA Solo Community and wished to give back to the sport by helping young women become more successful drivers and contributing SCCA members. You, Lexie Murray, and Youmna Zalzal are all great ambassadors of the Club, and definitely share that same mindset. Tell us a little about how you encourage other woman to try our sport.

JF: I’ve made efforts in the Mazdaspeed community to support and encourage all members, but particularly other women, to participate in the sport of autocross. I’ve taken part in organizing four different National meets, and assured autocross was on our schedule at each one. I also made myself available to instruct at those events, and really focused on getting the women members to take part with me. I’ve gotten several of the members’ girlfriends into the driver’s seat at autocross events as well. It has really been rewarding to watch them find enjoyment from it and helping them grow into better drivers.