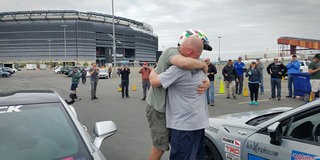 The 2018 Tire Rack ProSolo® season is rolling along with event number five taking place in East Rutherford, New Jersey this past weekend. Despite some challenges throughout the paddock, the weekend ended with three first-time Challenge winners with Danny Kao taking the Super Challenge, Michelle Knoll dominating the Ladies Challenge and Ted Descovich prevailing in the Bonus Challenge.

Cody Hunt's A Street Chevrolet Corvette broke a shock on the way up from Maryland on Friday, splitting into two pieces. Larry Casey, a fellow Corvette driver from SSr drove out to him, almost 2 hours South of the site on the NJ turnpike, so they could install a spare shock in order to continue the drive to MetLife. Once on site, Sam Strano loaned his Konis to Cody for the event. After all that, Cody finished fourth and co-driver Shane Chinonn-Rhoden claimed the last trophy position in sixth.

John Vitamvas' D Street Prepared BMW broke its differential on Saturday morning after only finishing one run. He managed to replace the differential in under 30 minutes and put down times good enough to win S3 and claim his first ever Top Qualifier honors for the Super Challenge on Saturday afternoon. By the Challenges, the new differential was starting to make noises and John was going up to the line with fingers crossed. He was eliminated in the second round by Mark Daddio, with a still-working differential.

The battle in L3 was extremely close with the top four ladies separated by half a tenth after Saturday runs. On the colder Sunday morning, Michelle Knoll found significant time to extend her lead, despite Chris Peterson also finding significant time to jump from fourth to second, just 0.126 second back from Knoll. This was her first ProSolo class win and she went on to win her first Ladies Challenge over Tamra Hunt, L1 winner.

In F Street, Mark Daddio was driving the Dick Rasmussen 2018 Ford Mustang GT previously featured on an SM post Even with the automatic transmission forcing them to use third gear, Mark held on to the lead until the very last run when Austin Don pulled off the 0.096-second win in his BMW M3. Chris Dressler claimed the third and final trophy position in another M3.

Over in B Street, Chris Carris set off on a charge on his final two Sunday morning runs to go from out of the trophies on Saturday to challenging for the win on Sunday. Unfortunately for him, Rachel Baker also found time on her very last run to keep her on top of BS by 0.261 second. Timothy Whalen, Elias Roman and Donour Sizemore rounded out the five trophies.

Ken Houseal finished 2nd in STS in Kevin Donovan's CRX (Kevin was 3rd) because of a late cone call that would have given him in the lead over winner Rich DiMarco. Ken made it to the semi-final round of the Super Challenge up against Eric Simmons. There was a noise coming from the engine, but Kevin told Ken to keep driving. The engine blew about 3/4 of the way through the course on the left side leaving a significant trail of oil. Danny Kao was the first through the oil spill on his semi-final round against GJ Dixon. Danny would win that round and the next to claim his first Super Challenge win.

Complete results from the 2018 Tire Rack New Jersey ProSolo can be found here.